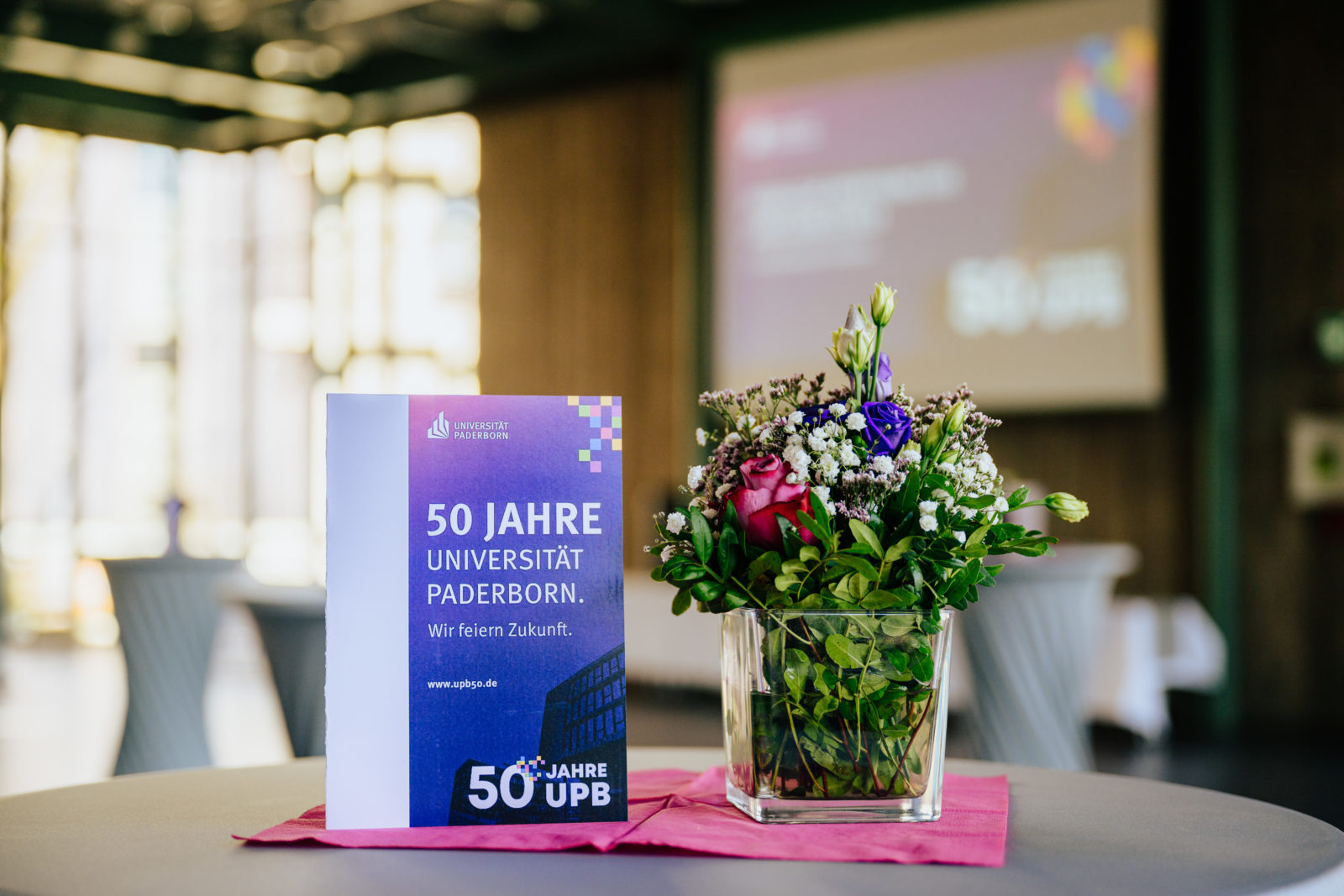 Opening Ceremony for the anniversary year


You can find all information about the journey here.

Together with around 200 guests from the worlds of science, business and politics and other friends, Paderborn University held a grand opening on Sunday 13 March for its anniversary year to celebrate its 50th birthday. Furthermore, for the first time ever, the audience could also fully enjoy the traditional New Year reception in the auditorium – with its ceremonial address, awards ceremony and musical highlights – in the form of a live stream. ‘A fifty-year celebration is a truly special anniversary. It is an opportunity to look back, take stock and draw confidence, as well as to develop new perspectives and visions’, as University President Professor Birgitt Riegraf emphasised in this year’s address about the university’s development.

Congratulations also came from Isabel Pfeiffer-Poensgen, the Minister of Culture and Science for the State of North Rhine-Westphalia. ‘Universities are vitally important for the scientific, economic, social and cultural development of our state – including Paderborn University. Since it was founded 50 years ago, it has been transformed from a polytechnic university into a forward-looking, research-oriented university. Particularly crucial elements include the rise in student numbers, the development of five cross-faculty profile areas, and numerous successes in transferring knowledge into practice and in internationalisation’, Minister Pfeiffer-Poensgen highlighted. She also noted that the university is a key partner for the state of NRW in training educators, citing the Paderborn Centre for Educational Research and Teacher Education – PLAZ Professional School.

Given the current situation, Pfeiffer-Poensgen and Riegraf also turned their sights to Ukraine and emphasised the role of universities in this crisis. ‘In these times, we are all shocked by the brutal war of aggression being waged against Ukraine by Putin’s government, which also represents an assault on international security and open democratic society. Paderborn University views itself as a cosmopolitan university that promotes international exchange and diversity of opinion. We are therefore all seeking ways of helping, offering solidarity and organising support’, the University President reiterated.

In her speech, Riegraf looked back over the previous year whilst also drawing links with the anniversary motto ‘Celebrating the future’. ‘Paderborn University has developed exceptionally well under the conditions of the pandemic’, the President noted. With the ‘Constructing Explainability’ special research area that was approved in 2021, spearheaded by Paderborn psycholinguist Professor Katharina Rohlfing in collaboration with Bielefeld University, for the first time Paderborn University has integrated all five faculties into a collaborative project funded by the German Research Foundation (DFG). ‘This is a huge success that is further showcasing the achievements of Paderborn’s scientists on both a national and international level, and sustainably strengthening the Paderborn University site’, Riegraf explained.

Paderborn University is also developing further in terms of the space it occupies. The creation of ‘Akzelerator.OWL’ – which will serve as a new home for the start-up scene in the Ostwestfalen-Lippe region – has begun, and the new high-performance computing centre and home of the Noctua supercomputer is now complete. ‘Our university’s visible successes in high-performance computing bear witness to the excellence and importance of the computational sciences and are a vital locational factor that will be developed even further in the future. In addition, an interdisciplinary research structure that is unique on both a national and an international scale is currently being developed in the shape of Paderborn University’s Institute for Photonic Quantum Systems (PhoQS), led by Professor Christine Silberhorn’, the President delightedly explained.

History combining the humanities and the sciences

This year’s keynote speaker was Professor Matthias Wemhoff, archaeologist and director of the Museum für Vor- und Frühgeschichte in Berlin, who has a very special association with Paderborn University thanks to his honorary professorship and role as a founding member of the Paderborn Institute for Interdisciplinary Research on the Middle Ages and its Effects (IEMAN). His address focused on Heinrich Schlieman, who discovered Troy, and how important the subject of history is for society. ‘We need history to judge and classify things – we cannot simply ignore it. The humanities and the sciences must maintain a dialogue with each other if we are to have a stable society’, Wemhoff summarised.

As is customary at the New Year reception, the ceremony was also used as an opportunity to honour Paderborn scientists and students for their exceptional achievements. In 2021, the Research Award – the highest endowed award that Paderborn University offers – went to Professor Hans-Georg Steinrück of the Faculty of Science for his research into desalination methods to combat global water shortages. Dissertation awards, Paderborn University Society awards and a German Academic Exchange Service (DAAD) award for international students were also conferred.

Ulrich Lettermann, who works as a lecturer in Paderborn University’s Department of Music, compered the ceremony and interviewed Gerrit Pape – deputy chairman of the General Students Committee (AStA) – about the current situation for students. In order to reinvigorate life on campus after two years of operation during the pandemic, AStA is planning various events for the coming semester, including opportunities for exchange, a fair presenting student initiatives, and collaborations with the city.

Soprano Leonore von Falkenhausen accompanied by Eckhard Wiemann on the piano, both artistic staff of the university, took the audience on a musical journey from the 18th to 20th centuries with pieces by Georg Friedrich Handel, George Gershwin and Leonard Bernstein. The university orchestra offered their melodious congratulations via video message.